View the interview by CBS Austin, Beyond the Podium here: http://cbsaustin.com/news/local/texas-doctors-warn-climate-change-is-impacting-public-health 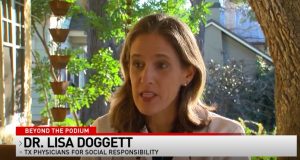 Doctors in Texas say climate change is not only affecting the weather, but public health.

The Texas Medical Association’s 2020 Winter Conference included a climate change presentation from Dr. Robert Haley, an epidemiologist and professor at UT Southwestern Medical Center. According to Dr. Haley, rising temperatures are directly affecting health in a variety of ways.

Data from the Capital Area Council of Governments shows temperatures are rising in Central Texas. According to NASA, it’s a world-wide trend. Globally, the past five years have been the warmest of the last 140 and 2019 was the second warmest on record.

As temperatures rise, the prevalence of allergies has sky-rocketed. Climate Central found in the past 50 years hay fever allergies have tripled and the number of people with asthma rose from 3.1 percent to 8.4 percent.

“We could reverse this to some degree if we just act. The problem is we’ve been paralyzed and are not acting,” says Dr. Haley.
Dr. Haley says the only way to fix the problem is large scale public policy change. Austin, for instance, is currently the largest region in Texas meeting federal air quality standards. But because air pollution isn’t limited to the area where it occurs, doctor’s say other cities need to act to prevent dire consequences.
“The implication is someday if we haven’t stopped this it will annihilate civilization, the human race will cease to be,” says Dr. Haley